We enjoyed a fantastic tour of Krakow, Poland in June 2019. Our two concerts and one Mass participation were a huge success, and many of us would like to return to this beautiful city to discover it in more detail.  The audiences were very appreciative of our concerts, so it was a delight to perform to such friendly crowds.

In June 2017 Fleet Choral Society toured Germany.  Staying in Leipzig, we performed concerts in the Nikolaikirche at Wettin, and the church in the Saxony village of Grimme.  On our final day we participated in a church service in Leipzig itself.  We were delighted to be joined by Soprano Emma Mabin and Organist Roy Woodhams for this excellent tour - many choir members said it was the best yet!

On our 2015 tour we performed in Amsterdam, Leiden (joining forces with Leidse Koorprojecten), and Ghent.  We performed works by our Patrons Bob Chilcott and John Rutter, along with Bach, Mendelssohn, Tallis and Luther - and even sang in Dutch!

We often receive offers from audience members to tour their towns, which often determines where we go next! 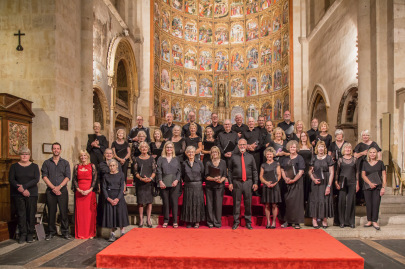 Fleet Choral Ensemble is the chamber choir of the Society and has been active since 1999. Numbering up to around 30 members, it is available to perform at a variety of events. The Ensemble has sung at weddings, birthday parties, at retirement homes, hotels, funerals and at a number of charity and other fund-raising events. It has a wide repertoire of choral music, much of it a Capella, from early English madrigals to newly composed music.

At weddings the Ensemble will be the choir and lead the hymn singing as well as sing anthems and special items during the signing of the registers. It will always consider special requests of music of any age or style that is suited to its resources. Items performed recently include: Folk songs, Sprituals, Christmas carols and selections from operas as well as songs by Britten, Chilcott, Genee, Gilbert&Sullivan, Rutter, Simon&Garfunkel, Stanford, Vaughan Williams and others. Madrigals by Campian, Ford, Lassus, Morley, Monteverdi and others, and anthems by Bach, Bruckner, Elgar, Franck, Lotti, Mozart, Randall Thompson, Rutter, Tavener, Vivaldi, Vittoria and others.

The Ensemble generally charges a fee which goes towards Society funds. Please direct any enquiries about the Ensemble here.